a good book (or two) 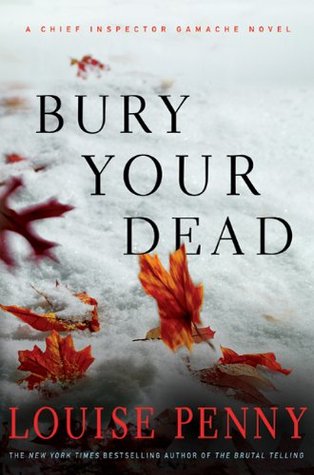 I’m behind on my book-reading goal for this year. I’ve been in a bit of a reading lull I guess. I have been reading the Inspector Gamache series by Louise Penny, which I guess you could classify as a “cozy mystery” series, but they’re much more.

Gamache is the wise and gentle head of the homicide division for the Quebec police. His team is tasked with solving murders all over the province, many of which seem to happen in the tiny village of Three Pines, located near the Canadian border with Vermont. The town doesn’t appear on any map, but it’s the kind of place I would like to live (except for all the murders, of course). There’s a cozy B&B, a bistro where the food all sounds delicious (seriously, I can’t read these books when I’m hungry), and the residents are quirky and charming.

), and it was heart-wrenching and just a level above the previous books. A good mystery is my guilty reading pleasure, but these are more than just the mystery. The characters and locales are well-developed, and Penny is a gifted writer. I’m going to have to start rationing the last few books, so I can keep enjoying the series for the rest of this year.

One more recommendation: I recently listened to The Martian

on audio. It kept me on the edge of my seat the whole time. I’ve never laughed out loud so much while listening to a book, and I’ve certainly never shouted in fear and frustration for the main character like I did with this story. The reader was fantastic, I’m really glad I listened to it rather than reading it. A brief synopsis: Mark Watney is a member of the second manned mission to Mars. It all goes terribly wrong, and he’s left for dead while the rest of the team escapes a violent wind storm. And that’s just the first few paragraphs. What follows is his struggle to survive, and NASA’s struggle to figure out a way to rescue him. There’s tons of science, which might sound boring, but is completely fascinating. In fact, that deserves the first ever gif on heylucy: