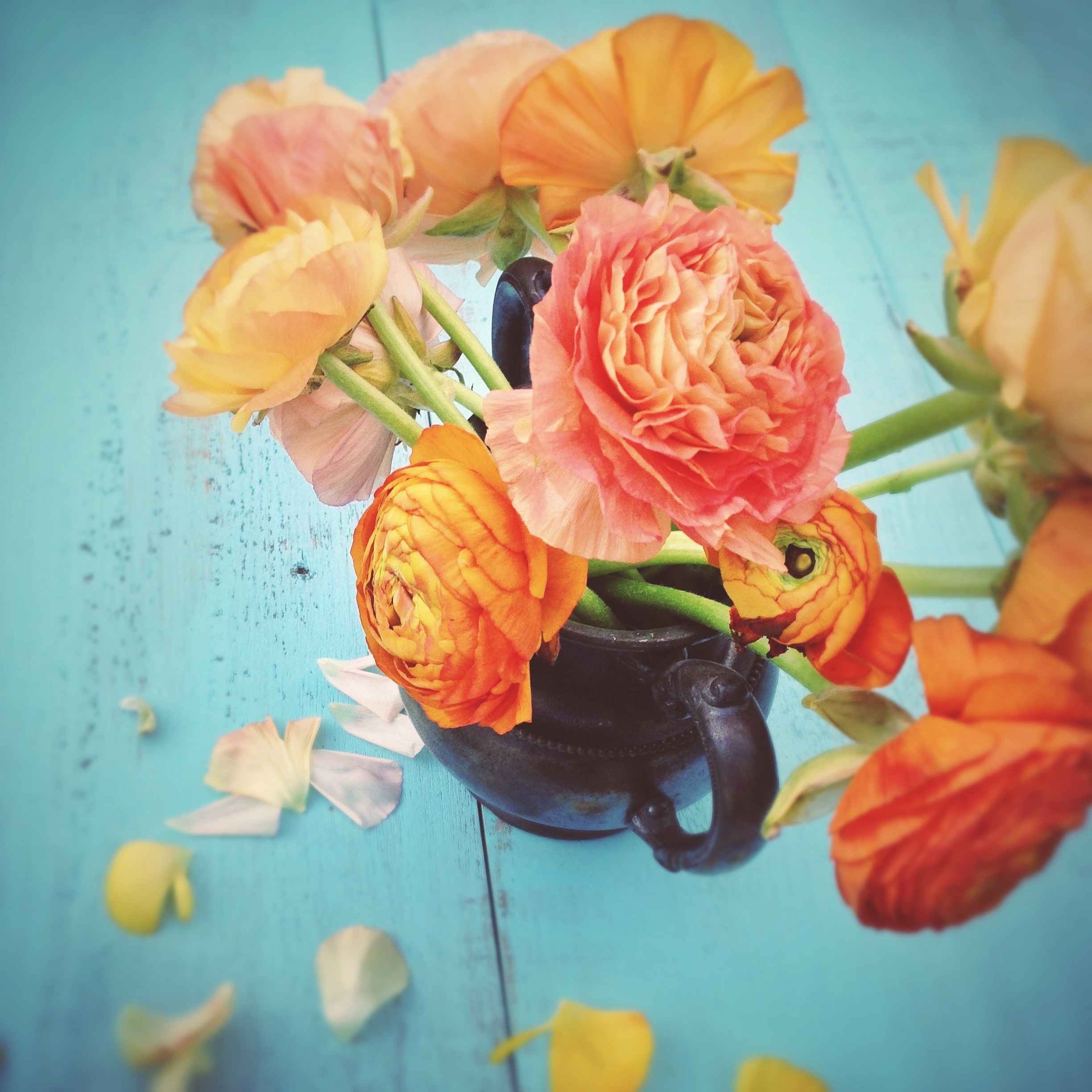 Hello! Spring is here and I’ve been wanting to write and share pictures, but haven’t found a way to make the time. Soon, though! I’ve been taking lots of photos of all the spring flowers and sharing them on Instagram. I’ve been working on some projects, and reading books, and playing with Pixel (and the other dogs, too), and making plans, and working at a new job, so I’ll tell you all about it all very soon, I promise!

This project didn’t actually make it to my undone list, because it was so close to being finished that I didn’t think it counted. Plus, I am going to blame the delay on the craft store stencil thieves. Can you believe there are actually people who want to stencils so badly that they are willing to risk jail time? There’s an ugly craft world underbelly out there. These are their stories (insert Law & Order sound effect). 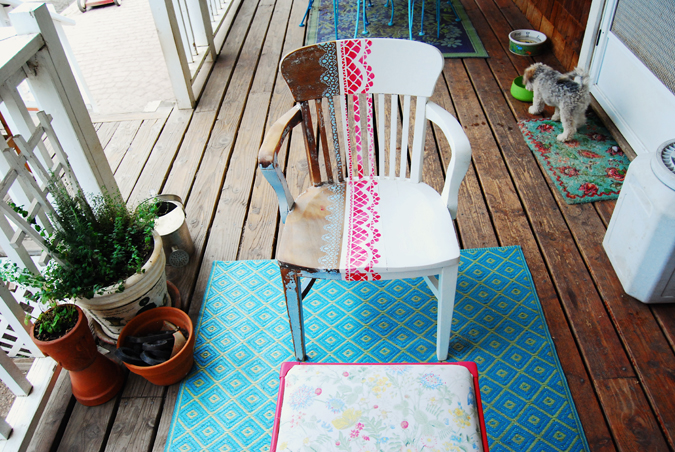 Bonus shot of Pixel scrounging for food in the background.

I was checking out the Martha Stewart paint aisle at Michael’s recently, and saw her line of stencils. They are much nicer than your typical craft store stencils, and I particularly liked this lace set. I’ve had this chippy chair sitting on the porch forever, and it wasn’t the nice kind of charming vintage chippy, it just looked bad. I had also recently pinned some painted and stenciled chairs, and so all this inspiration came together, and I bought my little stencil set and went happily on my way, blissfully unaware of the stencil drama to come (okay, I may be overstating this a bit, it wasn’t actually very dramatic, just inconvenient, really). 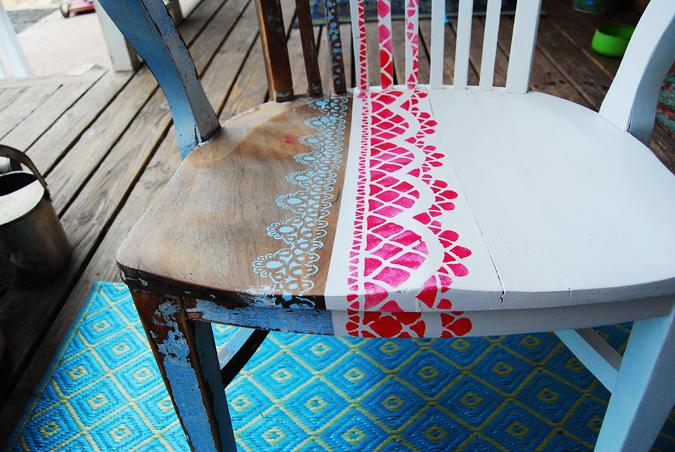 I sanded and sanded my chair, and got a reasonable amount of the paint off. Then I just taped it off and painted a little over half of it with a couple coats of semi-gloss white paint. I eagerly applied the big lace stencil in bright pink and got ready to do the smaller lace stencil when I discovered that my package was missing one of the sheets. Armed with my receipt and incomplete (and now used) stencil package, I went back to Michael’s to exchange it for a complete set. When I went back to the aisle for a replacement I found only one other package of the same stencil pattern, only this time, not one but all three sheets were missing! I want to know how one smuggles a stencil out of the craft store. I wouldn’t think you’d want to fold them up, and these things are pretty big. Plus, they are just not that expensive and you can always get a 40% off coupon. Anyway, the manager was quite nice and called a nearby store for me. They had it in stock and had it sent over for me to pick up the next day. Just don’t be surprised if the stencil aisle now has video cameras monitoring you as you shop, and for goodness sake, check the package before you buy it to make sure they are all there!

Back to my chair…I finished with the smaller lace pattern in blue and then sealed the whole thing with a wax finish, so it’s still a little chippy on the unpainted side, but it’s nice an smooth. I totally love it and now I want to stencil everything in sight. I will try to restrain myself.

Cushion is from Pier 1, but I don’t think it’s available any more. 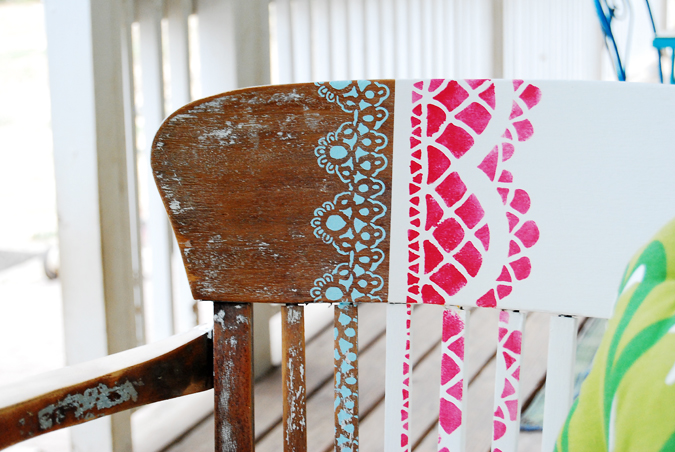 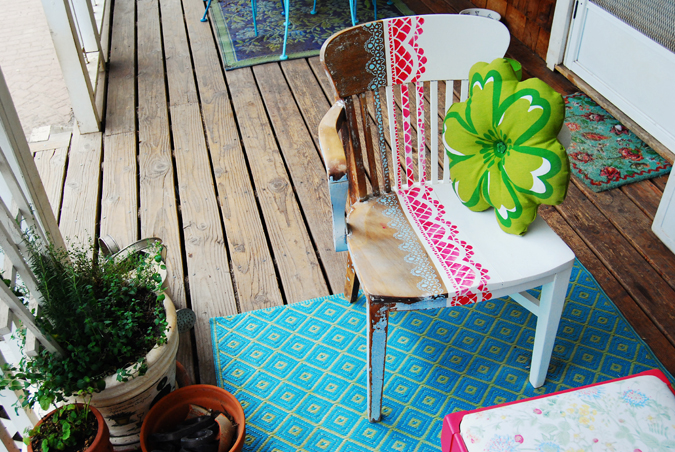 One project down, seven (or more) to go.

I have important things to do, but I took a little time here and there over the past few days to make a tiny pink bunny. Because sometimes you just need to do something pointless like that. I can't take much credit for the cuteness, I used a pattern and kit from The Old Pincushion, purchased over a year ago. She has lots of very cute patterns (and the supplies) for various little creatures, I can wholeheartedly recommend her shop.

And now I'm patting myself on the back for actually finishing a project, even though it is quite tiny. Most of the sewing was done by hand. I am not particularly talented with this, or with making small things. It's not something I will probably do very often, but the challenge of it is fun once in a while. I'm quite tempted by the tiny elephant pattern. Perhaps I should order it now, so I can make it next year. Do you like hand sewing and making tiny things?

I have a book to give away here on the blog this week, and you can give away 20 books if you hurry! I'll tell you about mine last, because it's not as important or exciting as World Book Night! Have you heard about this? I should have mentioned it sooner, but I signed up at what I thought was the last minute and then didn't think about it again until I got an email the other day that I had been accepted and would get the opportunity to share twenty copies of a favorite book.

So, what is this World Book Night thing, you may be asking? It started last year in the UK and has expanded to include the US and Ireland this year! It's a charity for the promotion of literacy and reading, which is very dear to my heart. Anyone in these three countries can apply to recieve twenty copies of a favorite book (you choose from a list of 30 very good books-I had to really think about which I wanted to share) to be given away in a location of your choosing-preferably to non-readers, on April 23. I chose Peace Like a River

, which is that rare kind of book that stays with you for years and years. Narrated by a young boy whose voice has been compared to Scout Finch or  Huck Finn, it is the story of a family and a tragedy and miracles and goodness. I can't wait to share it!

Go apply right now, the deadline is Monday, February 6th at midnight EST. You don't have to write long essays for each question, just give succinct but thoughtful answers and I think you'll have a good chance at being accepted. At least that's what I did.

Now for a little blog giveaway. It's been awhile since I've done one, but I just received a copy of the new paperback edition of Creative Quilting with Beads, which I contributed to a few years ago. It's got lots of fun projects, and even if you don't want to replicate them exactly, it's good for inspiration for everything from bags to wall hangings to fridge magnets (I think theses are super cute and would make great little brooches). I recently cleaned out my bead stash, so I might even include an assortment of seed beads and a little sewing kit along with the book. To enter, just leave a comment and tell us about a favorite quilting project or beading project (links to pictures are encouraged!) you've done or dream of doing. I'll leave the comments open until next weekend.

Some random things I wanted to share, with nothing in common, other than the fact that I enjoyed them:

I think this song and video are just beautiful. Passenger was definitely my favorite album of 2011. This is making me want to bind a book. It's been a long time. So many crafts, so little time.

When you find yourself with fifteen minutes to spare, go watch The Fantastic Flying Books of Mr. Morris Lessmore (inspired by The Wizard of Oz, Hurricane Katrina, Buster Keaton and a love of books. Trust me, it will make sense).

"When you knit something for someone, you're thinking about them. I think it just conveys love"

We've had some beautiful days lately. Sunday afternoon I went to a winery in Escondido, in support of a friend about to start chemotherapy. The view was lovely. pincushions for sale and a pattern for free

I did it, I wrote up a knitting pattern and made it all pretty, and you can download it here, or on Ravelry, and there will also be a link in the side bar. I called them Bridge the Gap arm warmers for obvious reasons, not to mention, they will keep that gap between elbow and wrist cozy too. Please do let me know if you happen to knit yourself a pair and if you find any errors or anything unclear in the instruction. I am studying up on pattern writing, which is like learning a new language. I can read it, obviously, but it's a little different to write it. I'm nervous and excited, and ready to move on to the next design, which I hope will be even better.

Meanwhile, other sorts of making is also happening as I tidy up my little house studio. This is kind of fun, cleaning up all my stuff and making things with what I have. I finished up a bunch of pincushions and a few needle books and listed them on Etsy. These were made with some vintage copper candy molds I found at an antique mall. I really like them, and I might have to keep the pink one for myself if it doesn't sell. The others, sold in sets with matching needle books, are tiny tart tins. I do love a good needle book. I sorted through all my vintage buttons to find just the right ones. I've done these before and they sold out pretty quick. I'm working on a new, bigger pincushion. I'll try and get some of those listed next week.